Looking for a Norwegian Getaway review? You have come to the right place!

The ship is adorned with artwork by popular local artist David Le Batard ‘Lebo’ in a Miami theme. From the hull to dining rooms you’ll see the Miami native’s impressive and distinctive artwork.

Read on for more about what we loved and loathed in our Norwegian Getaway Review.

In a nutshell: We loved the food in the complimentary restaurants. There was plenty of variety and the quality was good – especially the New York strip steak.

Our room was small, which we expected. When cruising NCL we prefer to take advantage of the activities on board, of which there are plenty on the Getaway.

Ropes course, extreme slides and hot tubs – we did them all and loved it.

We would recommend a Western Caribbean cruise on Norwegian Getaway to couples but there’s really something for everyone from families, to singles, to retirees.

We chose the inside guarantee stateroom. The inside rooms were a little smaller than those on other Norwegian ships (For instance, the Norwegian Pearl has larger inside staterooms).

The rooms didn’t have any drawers for your belongings so you only had the choice of placing your suitcase under the bed or hanging your ironed items in the cupboard. In saying this, it wasn’t that much of a problem for us.

There are 14 decks on the Getaway. People generally prefer to be higher up but we’ve never had a problem with any cabin aboard the Norwegian Getaway cruise ship.

We also paid $15USD per person per night (excluding taxes, $60 including taxes) so we weren’t picky. The food on the ship is fantastic. There are six restaurants on board the Norwegian Getaway in the complimentary dining category. Like other Norwegian ships, the same menu is served in the Tropicana room, Savor & Taste (‘the Main Dining halls’).

The Main Dining halls offered a varying menu each night with some old faithfuls appearing on the menu every night including the New York strip steak & the chocolate lava cake.

Cons: One thing I will mention is that service is pretty poor in all the Getaway’s complimentary dining restaurants – you will wait a long time to be served dinner.

However, in the Tropicana room this wasn’t too much of a problem if you were seated near the entertainment.

The Tropicana room offered nightly entertainment while you dine including dance performances & live music which provided great value for money as it would be very expensive to replicate a similar experience outside the cruise. The Shanghai Chinese restaurant was also a particularly popular choice for dinner due to their mouth watering dumplings.

Food is made fresh and made to order. Just mark your selection on the order form and your order will be whipped on by the chefs.

Norwegian Getaway Tip #1: be warned there are limited seats at this restaurant.

The venue opens at 5.30pm but people are lining up to be seated there at 5.00pm sharp. In terms of the buffet, there was a large range of food available and it was of a pretty good standard for a cruise buffet.

I would highly recommend the Nutella & banana crepes made to order on the Norwegian Getaway! A lot of people indicated that Norwegian’s paid dining options were fantastic but we were quite content dining at the complimentary ventures & felt like we had enough variety without spending extra money.

However, I will say, the decor of the specialty dining restaurants looked fantastic!

Sometimes Norwegian offers a free upgraded dining package so look out for that package if you are a foodie! On the Getaway you’ll find 20 unique bars, lounges and areas to buy a drink.

On days at sea the most popular by far are the pool-side bars on board. The broadway production on the Norwegian Getaway, Million Dollar Quartet, a musical which is inspired by the recording session that brought together Elvis Presley, Johnny Cash, Jerry Lee Lewis and Carl Perkins was of a very high quality and were very impressed!

If alternatively, you are more of a fan of dance, the Getaway also has this dance performance called Burn the Floor.

While we didn’t go to a performance of Burn the Floor we did watch them perform a mini show while we ate dinner one night at The Tropicana Room and that was very good.

I’m not a huge fan of dance performances usually but I was a little disappointed we didn’t take the time to see them perform after watching the mini-show at dinner.

We didn’t elect to go to either of these shows but if you are interested they cost around $30 a ticket.

Getaway Ship Show Tip #3: Most of the shows on the Getaway need to be booked in advance.

Tickets were limited to around 300 tickets (out of a ship holding 4000 passengers) so book in early on one of the big touch screens around the ship or on your Stateroom tv to avoid missing out!

We also particularly enjoyed the signature Norwegian competitions on the Getaway including the ‘Mr Sexy Legs’ competition where guys compete to be awarded with the sexiest legs on the ship. We also loved the Celebrity dance off where passengers signed up with a team member of the Getaway to see who has the worst/funniest dance moves on the ship. What’s On the Norwegian Getaway

Aside from the restaurants, shows and casinos, there’s tonnes more activities on the ship to keep everyone from families to couples entertained. Here’s the run down.

Norwegian Getaway Tip #4: If you want to avoid the queues for all the activities, wait until dinner time.

The most popular time for the water slides, pools and ropes course is just as the ship is leaving port for the day.

The Norwegian Getaway has an an aqua park featuring five multi-story water slides, two swimming pools (one for adults only), and four hot tubs.

We found the cruise decks and the recreational areas to be of an extremely high standard on the Norwegian Getaway. The Norwegian Getaway ropes course is made all the more exciting by the fact you’re traversing the course 16 stories above sea level.

Even if you aren’t put off by heights, the course was sufficiently entertaining for these 2 sober 20somethings.

The ropes course – the largest currently at sea – was clearly a winner for families, kids and teens too.

There’s plenty to do on board including a rock climbing wall, mini golf and basketball.

All the recreational areas on the cruise were complimentary including the large fitness centre.

We though the itinerary on the Norwegian Getaway was pretty good. We actually really enjoy the days at sea because it’s an opportunity to enjoy all the activities on board.

This was our Western Caribbean itinerary and what we did at each port:

Norwegian Getaway Tip #5: Save hundreds (and getting a better feeling for local life) by doing a DIY shore excursion.

We show you exactly how, step by step in photos, in our NCL Getaway Western Caribbean DIY shore excursions guide. 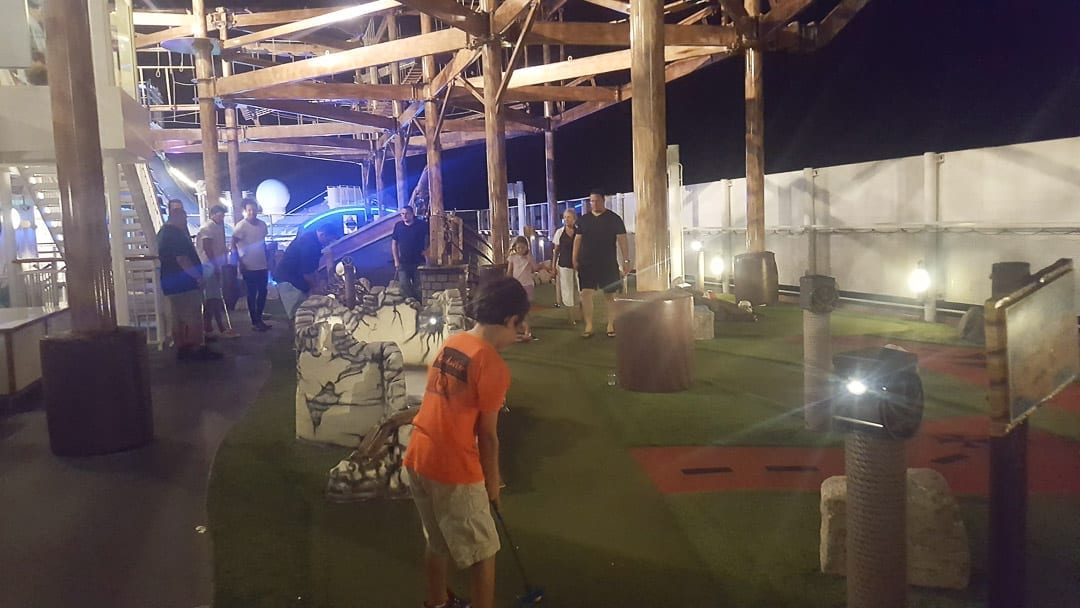 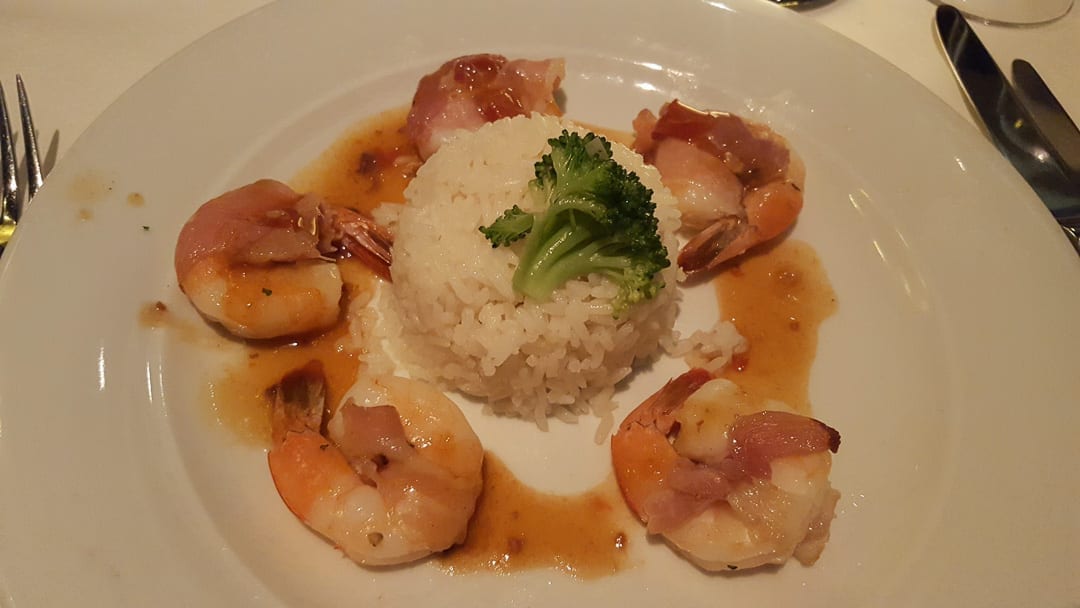 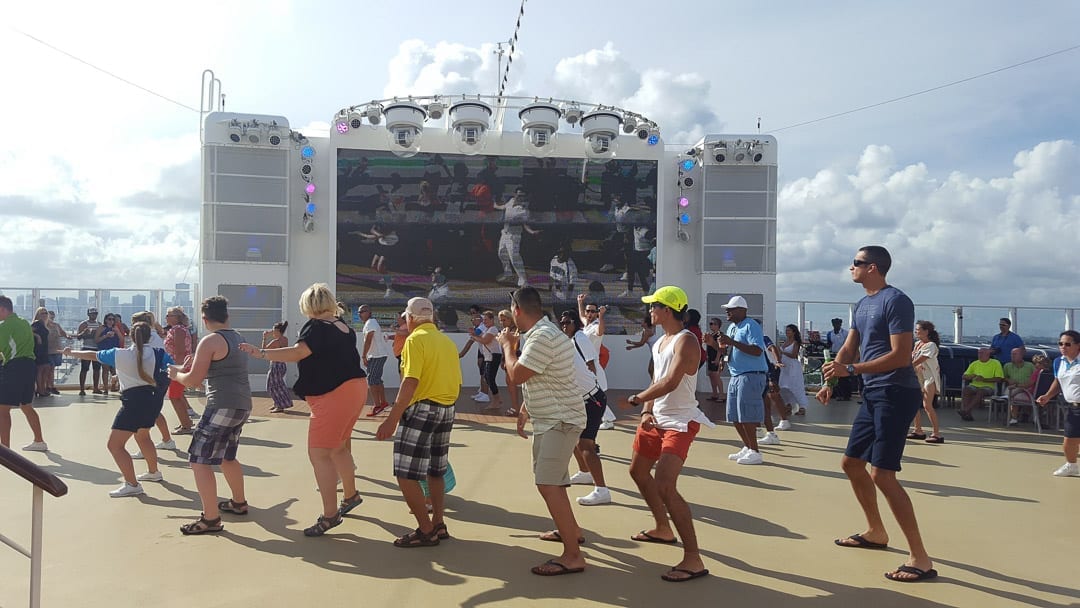 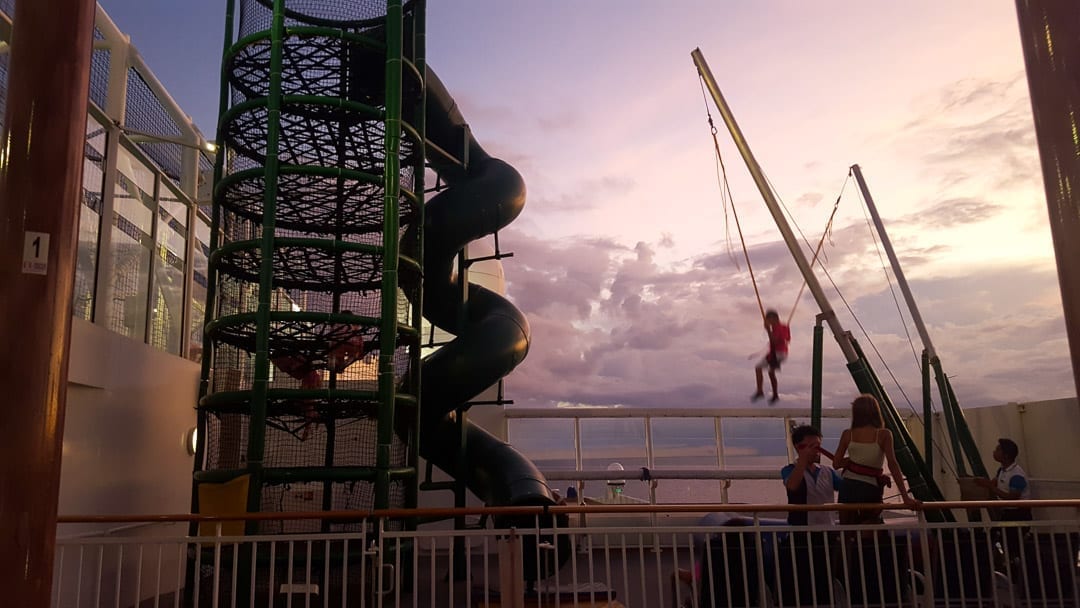 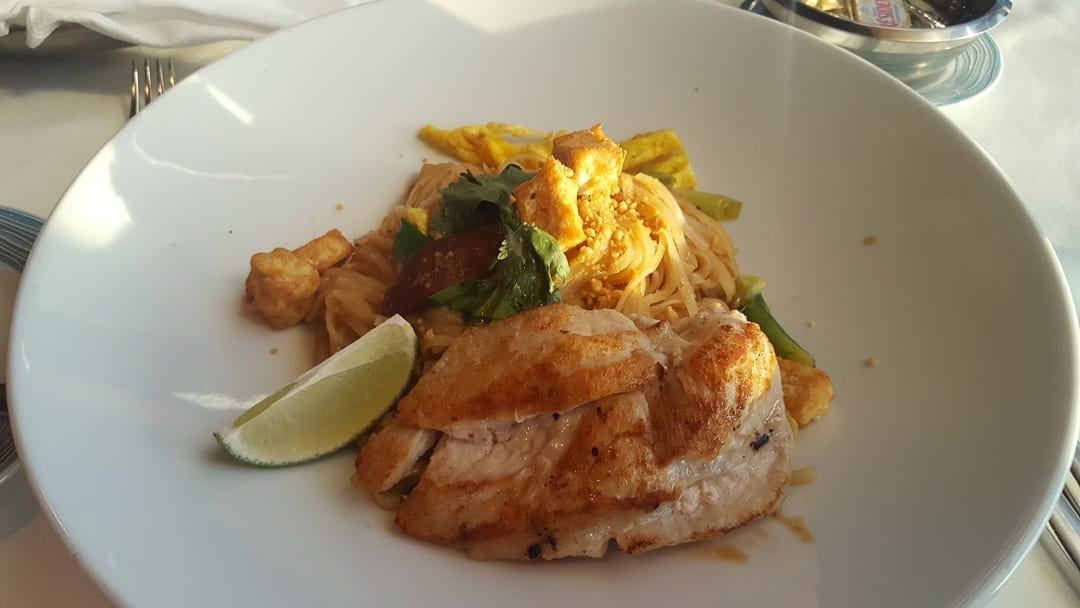 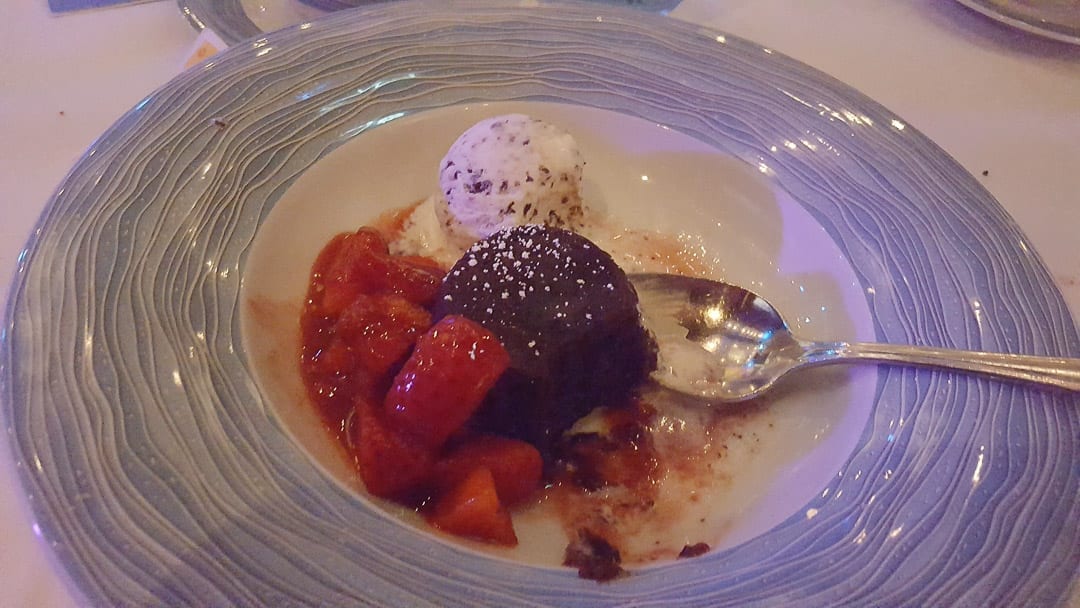 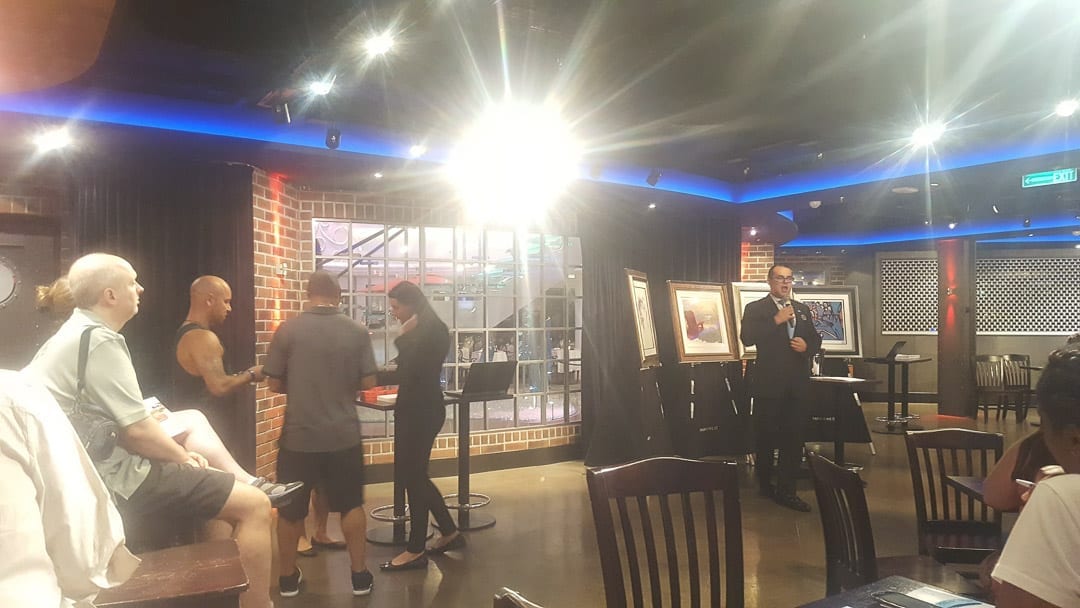 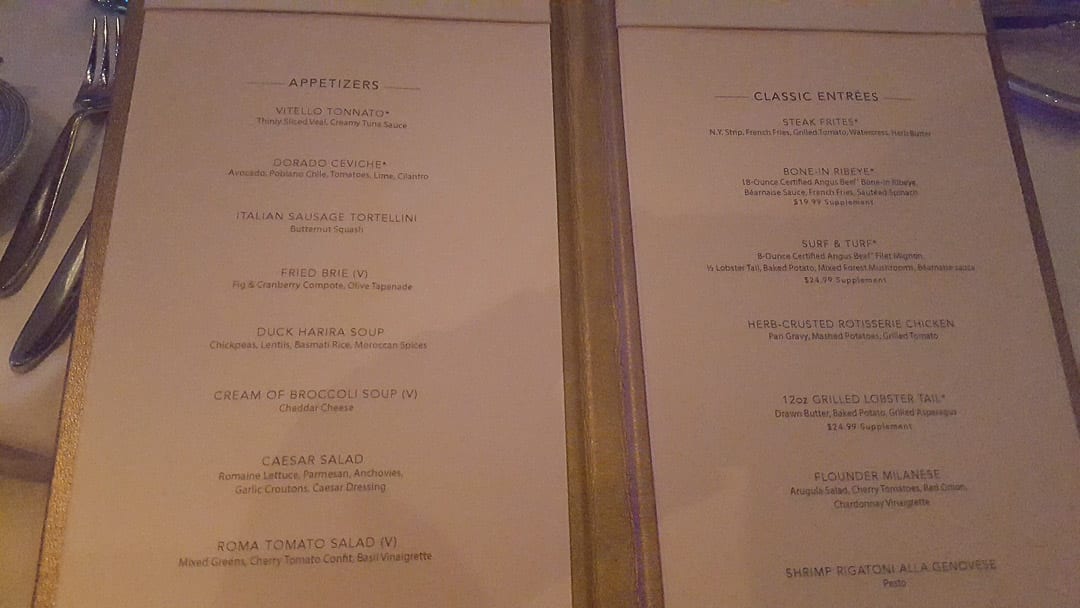 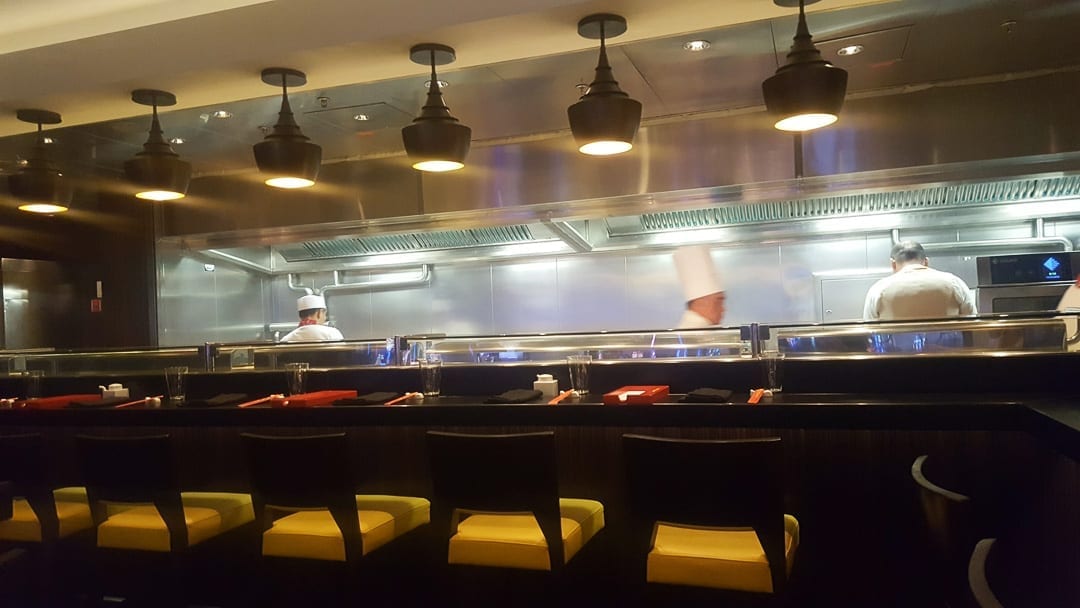 Book the Norwegian Getaway for $15 per night

If you are flexible with dates, you can search Cruisedirect by month for all sailings.

Norwegian Getaway Tip #6: As we booked in September / October – just after school holidays finished – we got an awesome rate of $15 per person per night excluding tax.

Even with tax, our total of $60 per night is incredible value.

We booked our cruise through Cruisedirect and we recommend you do the same because they consistently have the best deals.

What we like is that the site is quite user friendly and you can search cruises by price.

7 Night Caribbean Cruises from $469 on Norwegian, only at Cruisedirect.com. FREE Open Bar & Shore Excursions, Plus Up to $500 to Spend On Board!

Best Couples Cruise to the Bahamas