You are here: Home / Travel Guides / South America / Argentina / Iguazu Falls to Buenos Aires with Río Uruguay – The Most Luxurious Bus Journey Ever

Read on for information about seat options, where to find a cheaper bus and how to book the bus in Puerto Iguazu.

But first, check out our video about our Rio Uruguay bus review!

The overnight bus from Iguazú Falls to Buenos Aires costs from 1300- 1950 Argentinean pesos ($82 – $123 USD) depending on the level of comfort you require of your seat.

In Argentina, there are generally three levels of overnight bus seat comfort. The perks also vary according to which level of comfort is selected:

As we were a little apprehensive about spending 18 hours on a bus, we definitely wanted to book the most luxurious seats possible to make the journey more bearable.

We read online that the price of these buses are as little as half when taking the buses from the nearby city of Ciudad del Este in Paraguay.

We could not find anywhere to book online or any further information about buses in Ciudad del Este so we decided to check out the city ourselves & enquire at the international bus terminal while doing so.

What we found was that Ciudad del Este predominately sold semi-cama seats at a little cheaper than their Argentinean neighbours, at a price of around $60 USD a ticket.

There was only one company selling cama suites in Paraguay, Crucero del Norte, at a great price of $80 USD. However, these were unavailable to us as they were completely sold out for about a week in advance.

Despite not ending up booking our bus in Paraguay, we enjoyed checking out the town of Ciudad del Este anyway!

How to Book an overnight bus in Puerto Iguazu

After an unsuccessful attempt of booking a bus in Ciudad del Este, we headed to the international bus terminal in Puerto Iguazú to book.

We decided to book with the agent offering us 1800 pesos ($113 USD) for a cama suite purely because it was the cheapest option in the category we wanted and we had no particular preference to a bus company. 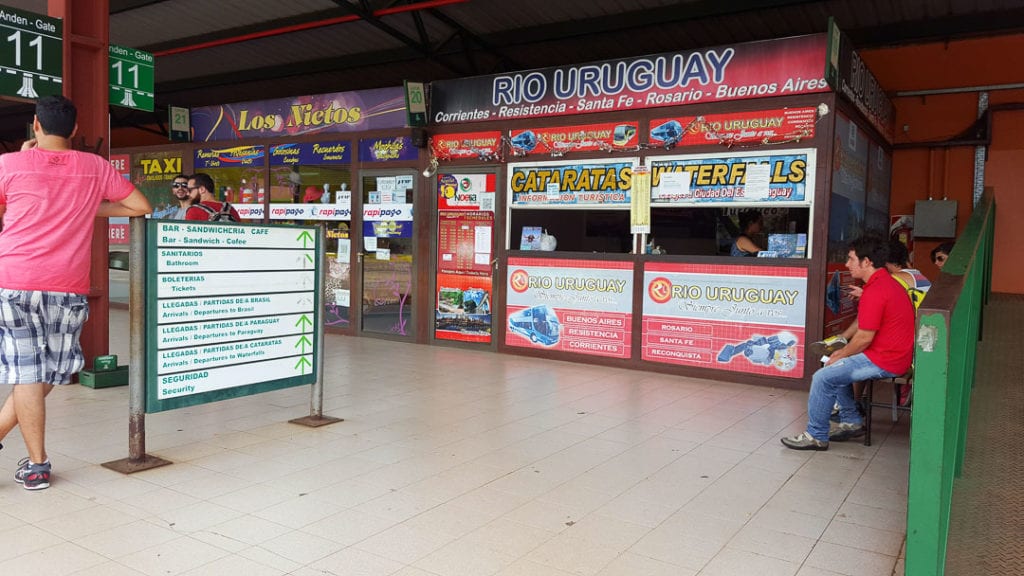 The Rio Uruguay cama suite bus left at 2pm and arrived at around 8am the next morning in Buenos Aires.

Despite the very long journey, we were very happy with our decision to pick a cama suite on the Rio Uruguay bus company – so much so that I might even chose this option over a flight at the same price!

When we first got on the bus in Puerto Iguazú, we were the only people on the bus. This remained the same for a good few hours.

Upon embarking, we received a soft drink & a chocolate treat. A few hours later, the attendant came around with hot beverages and snacks a few hours thereafter with dinner and alcoholic beverages.

The service ended for the night with an after dinner dulce de leche treat. I think we were entitled to after dinner champagne but that never arrived.

The next morning, about 1.5 hours before arrival in Buenos Aires, we received breakfast with another hot beverage.

While I wouldn’t rave about the food we received, it was similar quality to what you would receive in an average economy flight and certainly edible. 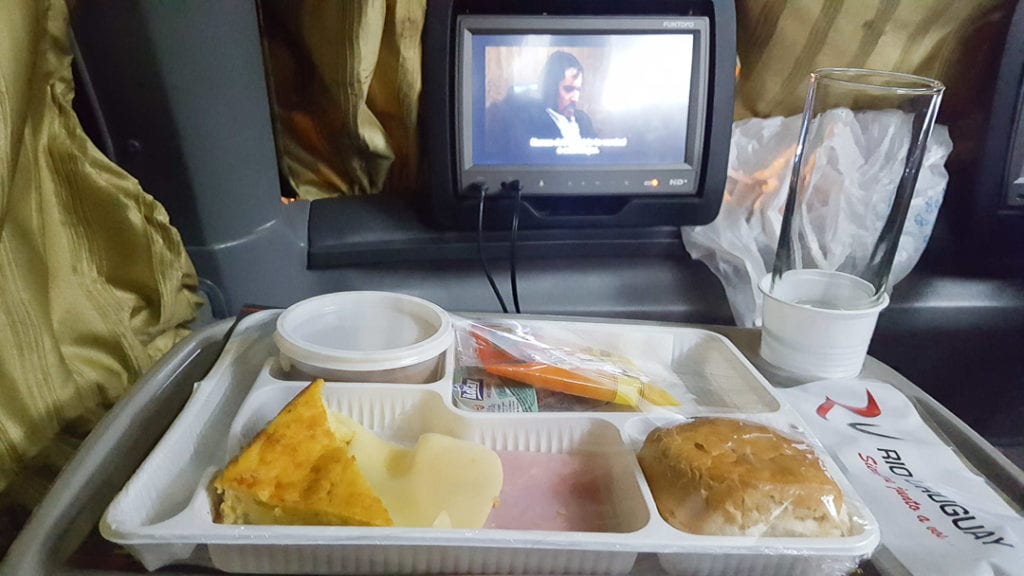 Dinner on Rio Uruguay Bus from Iguazu to Buenos Aires 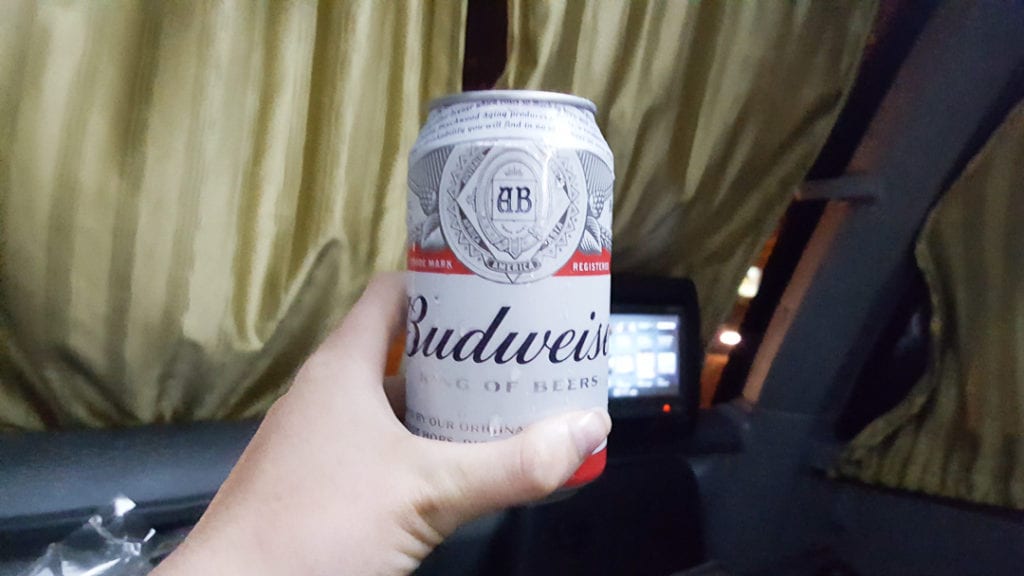 The seats onboard were relatively large & very comfortable. We did not have any trouble sleeping during the night on the journey, being able to recline to a full bed!

We also enjoyed having the individual entertainment system as there was a large number of movies & tv shows available to keep us entertained before we went to sleep for the evening.

As for the wifi, while it worked for a while upon leaving Puerto Iguazú, we couldn’t seem to get it to work at all for the remainder of the journey until arrival in Buenos Aires.

Overall, we were very happy with our experience & wouldn’t hesitate booking an overnight bus again in Argentina!

Note: You can also book online using this site however, we found booking in person to be cheaper. 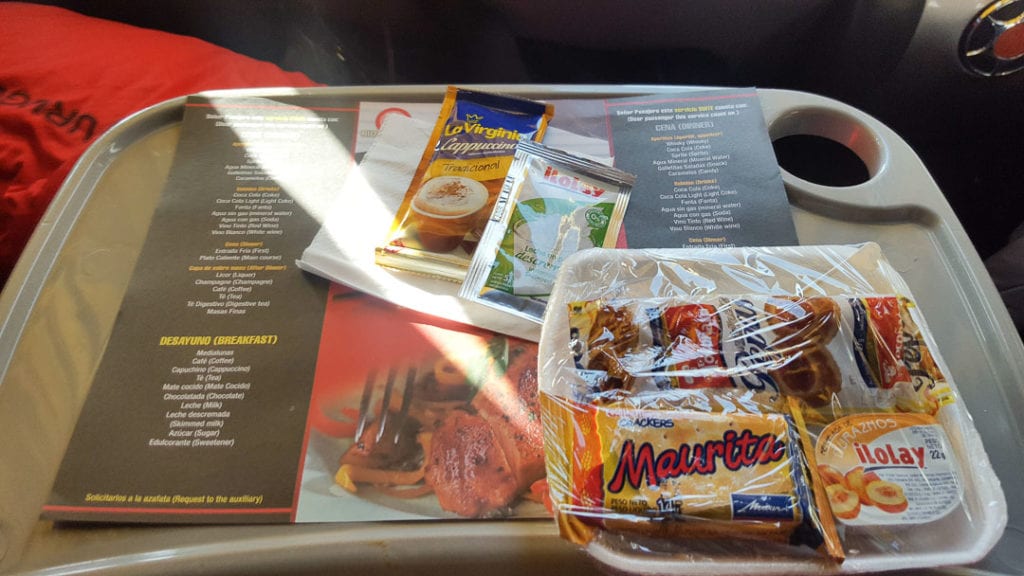 Write any tips you have about overnight bus travel in Argentina in the comments below!